I hope no one minds that I have dragged this recap out this long.  And if you do mind, well it’s my blog. 🙂  Come back tomorrow for more talk about running.

Finally, it was time to leave Dublin.  Not to disparage the city, or anything.  It was a lovely city, just too crowded.  I would like to go back someday when there aren’t insane football fans on every corner.

On the way to Kerry, we stopped at Blarney Castle.

Bad news guys, I did not kiss the Blarney Stone.  I would have liked to climb up into the castle, but the line to get in was about 90 minutes long, and since we were limited in how much time we had there, I wanted to be sure to explore the grounds rather than just stand in a line.  Besides, that sounds very unsanitary.  And does anyone really think I need the gift of gab?

So instead, we wandered the castle grounds.  That was amazing.  It was gorgeous.  And it was another reminder that we were in a place very different from the United States.  No railings.  No protections.  And then there was this.

A poison garden!  With nothing keeping people from picking things!  But don’t worry, I didn’t pick anything.  I’m such a rule follower.

I did not attempt to pull it up to find out if it really screams.

It was definitely a place where you could imagine wizards and witches living though.  Very magical.

And finally, we made it to Tralee and checked in to our hotel.  We were all so tired that we just opted to eat in the hotel bar. Which was delicious.  I need to find the recipe for the brown bread we ate everywhere.

Yet another bus tour, but this one was amazing.  We had a wonderful tour guide who told us all about the history of Ireland and about her adventures as a tour guide.  She was the sort of person I want to be friends with. She does all sorts of tours on foot and bike around the Ring of Kerry, and I want to join her for one some day.

Also, she encouraged us to have an Irish Coffee (coffee, cream, sugar, and Jameson) early in the morning.  I had one and I cannot disagree with her. 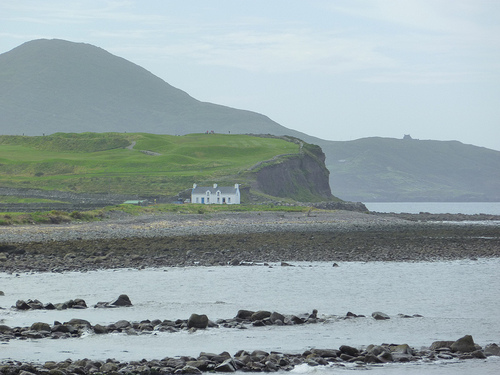 My photos don’t do this trip justice.  It was gorgeous and I want to go back and bike the route.

The trip ended with a boat ride.

All in all, a very cool trip, and a perfect way to end our visit to Ireland.

We were scheduled to go to another show that night, but we were so tired and the people going to the show wouldn’t get back til almost midnight, so we decided to skip it and just be lazy and enjoy our last night in the country.

Goodbye, Ireland.  This day was filled with stress, culminating in me getting scolded by an American Airlines agent for somehow violating federal law (note: she was wrong).  It definitely made me glad to be home, and glad that I’m not doing any big travel for a while.  But don’t worry, Ireland.  I will be back.