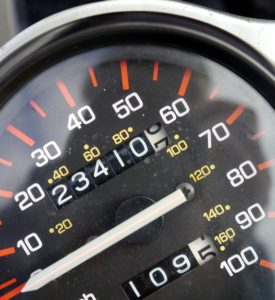 Okay, so I can’t believe November is already ending.  Yes, I have probably said this every month, but seriously, where is the time going?

November was a great month!  I finally, finally got to race a half marathon and it went so well!  I’m still working on my recap, but in sum, it wasn’t my fastest, but it wasn’t my slowest, and it didn’t hurt.  I feel like I’m finally back.

However, in November, I also did my best to avoid going to the pool.  I don’t mind swimming.  It’s a good workout and I always feel great having done it.  But I just don’t like going to the pool.  Swimming is my only AM workout – all the rest happen after work, so I suspect it’s simply that I don’t want to drag myself out of bed and head out into the dark, cold morning.  Summer swimming is nowhere near as bad.

Yes.  I went to the pool twice.  Two times all month (and one time was today).

I’m actually blown away that my run miles topped my bike miles, but this was a very run focused month.  So many long runs.  But they were absolutely worth it.  I even did a 13.1 mile training run, which is the longest training run I’ve done since I was marathon training years ago – usually I top out at 12.  But I trusted my coach on this one and she was right.  I probably didn’t need that extra 1.1 miles (actually the plan only required 13, but I was getting that last .1), but it absolutely gave me the confidence I needed going into my race.  I knew that I could cover the distance without pain and not having that stress on race day was huge.  It also gave me an idea of what my finishing time might be, which removed that stress.  I know I’ve lost speed this year, and while I know it will come back, that doesn’t mean that I don’t feel a twinge of disappointment that I’m not immediately fast again (“fast” being a relative term – I am very much a party in the back kind of racer).

My next race isn’t until April, so I’m looking forward to a few months of rebuilding and getting into shape.  I have big plans for 2019!

I love running outdoors.  I live near an awesome trail, and I love putting on my headphones (in only one ear, of course) and listening to an audiobook or podcast.  Sometimes I run without any sound, especially when I’m turning over a problem in my head.  Running solo is a great time to do some thinking.

But running solo can also be a little scary.  It seems like every time you turn around, there is another story of a female runner who was attacked while out for a run, and in the worst case scenarios, killed by her attacker.  I can’t say that this fear is on my mind when I head out for a run, but I always make a point to be aware of my surroundings, to only run during daylight, and only on days when I know the trail will be well populated.

A number of years ago, I also started carrying pepper spray when I run.  After doing some research, I opted to use Sabre, so when the opportunity came up to do a review of the product, I quickly accepted, as this is a product that I know and recommend.  In fact, the photos of the pepper spray here are of the handheld I’ve been carrying all year (well, half a year, thanks to injury) – the spray I was sent for review was gifted to a friend to keep her safe as well.

What do I like about Sabre?  Well, I have to admit, I can’t vouch for the strength of the pepper spray.  Thankfully, I’ve never had to use it, and I wasn’t about to test it on myself for this review.  Really, what I like about this particular spray is how easy it is to carry.  The little canister comes in a little elastic holder with a velcro strap that goes around your hand and can be adjusted to fit many different sized hands.  Additionally, the trigger at the top has a locking mechanism, so you’re less likely to accidentally spray it, but a quick slide of your thumb will unlock and have it ready to spray in a split second. 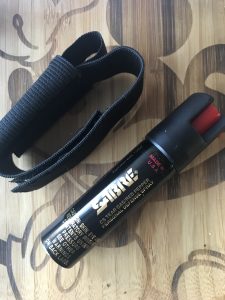 The pepper spray itself has some unique features.  It’s actually a gel, so it’s less likely to blow back in your face, which is a definite plus.  It also has UV marking dye in it, so if you spray someone and they run off, the police will still easily be able to identify them.  Each can has 35 sprays, so there’s no worry about running out after one blast, and if you want to test it in your backyard before you take it out on a run, there’s no concern that you’re going to empty the can. 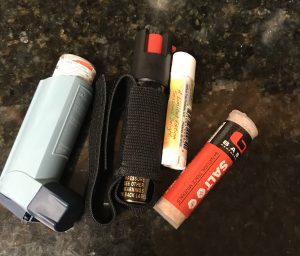 On Instagram, a fellow Bib Rave Pro got called out for essentially being a wimp for running with pepper spray, saying it was an over-reaction and that running was perfectly safe.  And yes, in the 13+ years I’ve been running, I’ve never been attacked while out on a run.  But I would rather be safe than sorry.  I also always run with identification, money, and my asthma inhaler, and typically don’t need any of those either, but I’m not about to run without them.

Peace of mind is worth a lot, and many of us go out for a run to help clear our heads.  Take Sabre Pepper Gel with you for that added peace of mind and enjoy your run!

(Note that a few states do have restrictions on pepper sprays, so check out Sabre’s site to learn more.)

As I continue to make my triumphant return to running, I have my next big goal coming up next weekend – the Space Coast Half Marathon.

This will be my sixth year running this race, and I always look forward to a weekend of spending time with friends, running a great race, and getting into the Christmas spirit.

This year’s race is big for a couple of reasons.  It’s my first half marathon of the year.  I haven’t raced a half marathon since last year’s Space Coast (and technically, I had to walk the last chunk of it because I pulled my soleus).  So this is sort of the last big hurdle in my recovery.

Am I ready?  You bet.  I’ve been doing a ton of PT, and my coach made me run a 13 mile training run, so I know I can cover the distance.  Will it be fast?  Nope.  Though it probably won’t be my slowest Space Coast either – that honor goes to the first year I ran it, when I woke up with a crushing headache but refused to not at least try.  But I’m not letting myself look back at my previous race times.  I don’t want to know how much slower I’ve gotten because it doesn’t matter.  I don’t want that to be on my mind while I run – I just want to have fun.

Do I have a race plan?  Basically, don’t get hurt and have fun.  I think my sister may run with me, and I may also end up with some friends.  I’m certainly not planning to push myself.  The course has a time limit such that I could get lost, have a picnic, get back on the course, and still finish with time to spare, so it’s nice to not have that worry.

I am really hoping to end the year on a high note, since this time last year, I was struggling with hip pain and it was a frustrating way to end the season.  But really, finishing at all will be a win in my book.  And I’m confident I can accomplish that.  It’s been a long road to get here, but it’s been worth all the work.

As many of you have probably seen on my social media, I’m super excited to be back on the Coeur Ambassador Team for the fifth year!

This team has truly become a family to me.  I love all of these ladies and I’m excited to get to know all the new members on the team as well.  Every single one of these people is amazing, and if you see any of us out there training or racing, don’t hesitate to say hi.  Need advice?  Just ask?  Just need a friendly face?  You’ve got it.

Seriously, just knowing these people has made me a better athlete and a better person.  They’ve helped me push out of my comfort zone and do things I never thought I could.  They supported me through my frustrating recovery, and I’d like to think I was able to support some of my fellow team members in the same way.

This is always a tough time of year when triathlon teams are announced, as there is excitement and hurt feelings all at once.  It’s so tough when a friend doesn’t make a team they were hoping to join.  I’ve definitely had my fair share of rejections over the years.

But the thing is, there are great groups out there.  So many great groups.  Awesome Facebook groups, various forums online, and groups like The Collective Beat, which is Coeur’s community team.  I joined this team last year and met so many awesome ladies, and will be joining up again for 2019.  Definitely check it out and see if it’s right for you.  It’s filled with very uplifting ladies who have created a phenomenal community.

If you prefer in person, check out your local triathlon club or clubs.  Can’t find one?  Make one!  Or at least see if you can’t find some local folks to bike or run with.  Create a Facebook run event and see who shows up.  It sounds intimidating, but it’s really super easy, and who knows who you might meet!

I’d say I’m officially back to running.  With the Army Ten Miler under my belt and some more double digit runs on the way, it feels good to finally be able to train again.  I’m still working to bring the speed back as well and I am so stiff the day after a long run, but that will all improve with time.

I’m also starting to think about my 2019 race season.  I’m still going to be doing quite a bit of rebuilding, but I’m hoping for some big things come mid-year.  I’m not sure that I’ve mentioned it here, but next year, I’m tackling 70.3 Ohio!  I haven’t done a 70.3 since 2016, so this is going to be real test of my recovery.   Mostly, I’m just excited to race with a whole bunch of friends and do a bunch of stupidly long training rides.

Not too shabby!  Considering I had a choir concert in there with a ton of hours of rehearsal, this is some pretty decent mileage.  Of course, as it’s getting cold, it’s getting harder and harder to go to the pool in the mornings.  I read somewhere that even Olympic swimmers loathe the moment they have to get into the pool on a cold winter morning, so it’s good to know that feeling’s never gonna fade.